Ever heard the phrase ‘An apple a day keeps the doctor away’ – well there might be some truth in this.  Let’s dispel some fruit myths and facts…

Fruits used to be the staple in people’s diets and now with all the scare mongering with the ‘anti-sugar’ brigade many people are avoiding fruit.  Just to clear this myth up – sugars found in fruit are natural & found in the cell structure of fruit itself.  Fruit sugar is different to sugar added to food & we don’t count it as part the 6 teaspoons of sugar a day

We know from many studies that fruit is not linked to any adverse health effects, quite the opposite in fact.  A Swedish study with 80,000 people showed that those who ate 2 whole pieces fruit/d reduced risk of abdominal aortic aneurysm by 1/3 (bulge of stomach aorta becomes weak & ruptures). Another study in 2013 showed that eating x 2 pieces of fruit a day reduces the risk of developing Type 2 DM by 23%.  To put the apple concept into practice, one study in 2011 showed that post-menopausal women who ate an apple a day for 6 months reduced their LDL cholesterol by 21%.  It is thought to be the antioxidative affect that fruit has on reducing inflammation.

Juicing has become a hype and the shelves are brimming with smoothies and juices touting all sorts of health properties. What makes me laugh that juicing has a ‘detoxing’ label given to it yet the one thing that really is detoxing is the fibre which is gone after the juice is squeezed out.  Smoothies I think are a little better because at least the fibre is still there plus you can add milk or yoghurt to increase the protein and calcium.  Eating fruit is definitively more satisfying as people eat it more slowly & it lasts longer.  It’s also a more mindful way of eating rather than downing a juice or a smoothie.

I have the 80:20 rule when it comes to smoothies – 80% veg and 20% fruit so as you’re not overdoing it in terms of fruit calories. Carrot & beetroot & apple for example.

If you are looking for a juice go for one that’s 100% squeezed from whole fruit but stick to only one glass – so that’s 100 – 150ml a day which counts as a portion of fruit.  Drinking large amounts of fruit juice is a concentrated amount of fruit sugar which has lost most of it’s fibre to slow down the absorption of sugar into the bloodstream.  The only population groups I would advise to drink juice in is athletes and people who are underweight as their calorie needs are higher.

What Counts as a Portion of Fruit;

Each of these large fruits count as one portion: 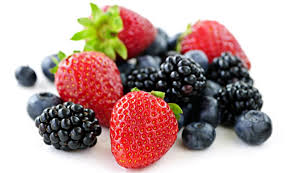 Each of these medium fruits count as one portion:
1 apple
1 orange
1 banana
1 apple

Each of these small fruits count as one portion:
2 kiwis
2 satsumas
2 plums
2 mandarins / satsumas

10 to 12 berries, grapes or cherries are one portion each

Dried fruit:
30g or 1 heaped dessertspoon of raisins or sultanas
OR 2 figs, 3 prunes or one handful of dried banana chips

Juices & Smoothies:
A small glass (100ml) of 100% fruit or vegetable juice can count as one portion, but only one glass counts. More juice in the day does not count towards your 7 a day

People generally aren’t eating enough fruit so if it means a glass of fruit juice to help meet your 7 per day then so be it.  Don’t be afraid of tinned & frozen fruit either as these can be good and cheap substitutes to fresh fruit.  If drinking fruit juice is part of your breakfast ritual then let it be and just watch the portion size.  No more than 100 – 150ml once a day which is the equivalent of one portion of fruit.  Try to eat a rainbow of colours to provide many flavonoids.